skip to main | skip to sidebar

Memories in the Grocery Store Aisles

Does anyone remember the Brach's bulk bin in the grocery store? Bins of candy bought buy the pound; as a child the temptation to sneak just one was great. The hope mom would give change to put in the locked metal box allowing you to pick was palpable. Sour balls, bull's eyes, Sunkist jellies, root beer barrels, caramels and Neapolitan.

In the summer, my grandmother would host four grandchildren and there was always copious amounts of ice cream. Not just any ice cream - Neapolitan ice cream. Not usually a favorite of mine but she scooped your bowl to order. Lots of chocolate, some strawberry and a little vanilla. At the end, the cardboard half gallon container had deep wells surrounded by the remaining flavor. Just a really cool thing Grandma's can do that a mother never would. It made the ice cream so much more delicious.

It never occurred to me to make Neapolitan candy but when I happened across a recipe I had to try it. So many of my memories are tied to food (or is it the reverse?) and this candy of acquired taste is a fine example.

Especially fabulous if you are a coconut freak, this candy covers all bases with vanilla, chocolate and er...pink. No mind because its striped results are a tasty blast from the past. With all its assumed kitch, the recipe includes vanilla bean seeds. Classy. 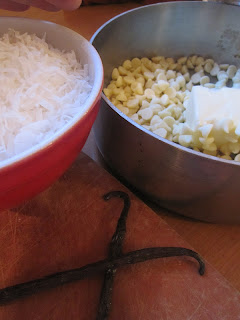 Melt white chocolate with sweetened condensed milk and vanilla beans seeds. Be sure to save those pods for the extract bottle or sugar bowl. Once it's melted smoothly, fold in the shredded coconut. 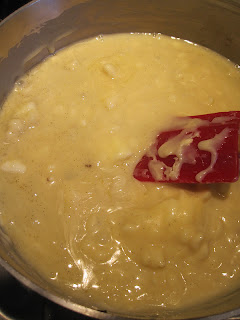 This white love is divided into three parts. One third becomes a lovely shade of pink. The last is flavored with best-quality unsweetened cocoa, 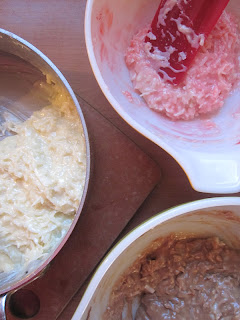 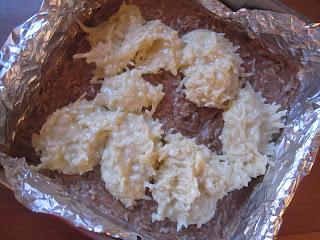 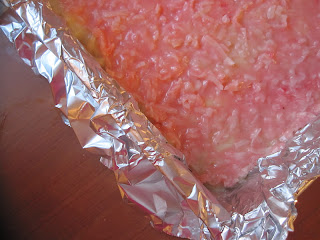 After a setting period, it's ready to cut into rectangles and be coveted by old Gen X-ers. My homemade had softer, smoother and more consistent texture. And, just as I recalled from childhood didn't really taste too chocolatey or vanilla-y or pink.
Bummer. In my excitement and Christmas nirvana - I never took pictures of these little goodies cut up and stripey.
But the next time you're at the grocery store, hit up the bulk bins. Don't forget your 33 cents to put in the locked box. They'll look and taste same but with presumably with more filler-crap.
You could make your own by consulting Martha recipe.
Either way, it's worth a walk down memory lane.
Posted by Jennifer at 9:00 AM No comments: Links to this post

I always do my best to make sure there are homemade cookies in the house for snacking and lunchboxes. A stingy mom, if I haven't made them there aren't any - purchased cookies are too expensive and full of junk. I never buy them. I only Trader Joe's Peppermint JoJo's - but who doesn't, right?

Until recently, this jar was used to display Max's baseball collection. Now it displays my cookies. 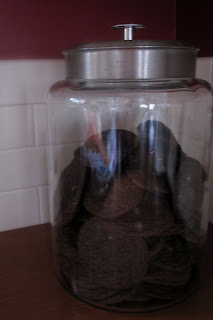 It looks super cool filled with cookies but it takes many, many, many cookies to fill this giant jar.

Of course, it doesn't need to be completely filled but that's a neurosis to discuss another day.
Posted by Jennifer at 8:16 AM 1 comment: Links to this post 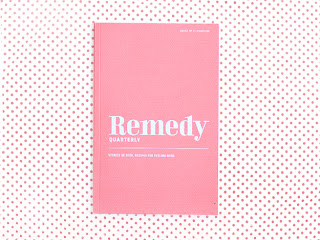 A long time ago, I wrote a post about life lists (note purposeful lack of back link). More recently, I decided a mother of four kids in three different schools (involved in cross country, track, show choir, chorus, builder's club, soccer, cub scouts and social lives greater than the sum of their parents) should not have a life list. It's just too depressing.

But - the sun also rises and in the time left in the wake of "a long time ago", I've tried my hand at some creative writing. Creative non-fiction or the personal essay - as opposed the stream of conscious I typically share here. I have really, really enjoyed it and determined I wanted to be published. Check that, I determined I wanted to be published in a neat little 'zine I stumbled across. It's called Remedy Quarterly.

So, I took a deep breath and put myself out there submitting a story idea to this project I really admire. I don't do waiting very well. I anticipated the "yay or nay" deadline anxiously. The day of said deadline, I had forgotten all about it and my heart was pounding when I found a surprise email. My story cut the mustard. It felt like discovering you made the team or got the part.

The current issue of Remedy Quarterly: Heritage includes "My Stainless Steel Locket" a story inspired by inherited and found recipe collections. I am very proud its inclusion in this collection of essays highlighting healing and delicious memories. In the spirit of sharing, I'd like to share a copy with you! Leave a comment sharing what your favorite family recipe is and be entered to win Issue #7. Leave your thoughts and a random winner will be drawn January 30th.

And now, with this little victory under my belt, I return to the keyboard.

Wish me luck.
Posted by Jennifer at 9:00 AM 2 comments: Links to this post

On a Creative Roll

In all, 17 people got their gift on in the yellow house for the annual kitchen gifts class last month. Since the second class was rather large, I modified my typical format and set up stations, tastings, examples and mini demonstrations.

One of the best parts of kitchen gifts is the creative wrapping process. I do my best to buy only brown paper and doll it up. A blank canvas to be made hip, sparkly,  rustic or traditional. To that end, I also try to corner the market with every possible cool bit to make conservatively wrapped gifts especially fun. When possible, I like everything to be reusable.

The problem in these classes has historically been how to display the goods without looking like JoAnne and Michael barfed on the table. The answer? Brown paper. 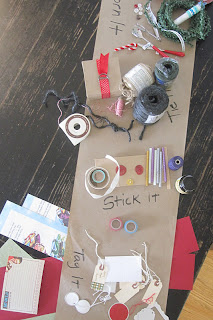 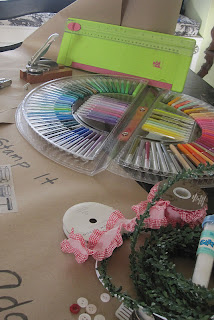 A cohesive display and much inspiration.
Disclaimer:
This post was written well before Christmas and abandon as many of my forthcoming posts were.
I must apologize for unearthing Christmas. It's past, it's done, it's packed away. But since I didn't get this posted in a timely fashion and really wanted to share this idea, here it is. To save myself, I wondered about other applications of this little display and come up with some others....
Gather your goodies and host a winter craft party. Use it to show step-by-step directions for the scout meeting or birthday party craft. Roll out a brown paper table runner at your Superbowl party. Draw out your plays, root for your team, label the snacks, never hear "what is this?" every again.
That alone, is worth it.
Posted by Jennifer at 9:00 AM 1 comment: Links to this post

in the Yellow House.

Henry ate turkey like a champ. Were hoping he goes to sectionals. 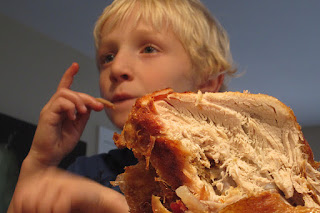 Jono turned the big 4-0 and his girlfriend is of age. 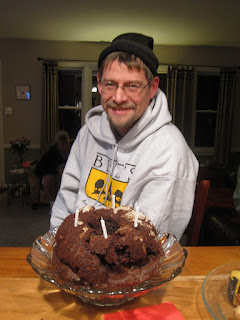 Ella caught the baking bug and will most likely be involved in many a bake sale to pay for the bus. 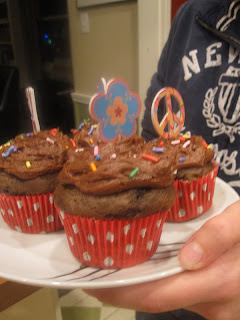 Max is loving the music, picking up choreography tips and discovering new directions. 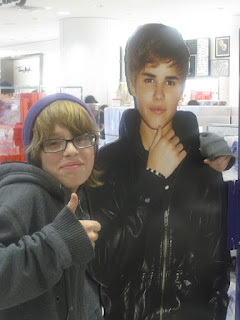 Jake and his friends are still dorky boys but haven't gotten slushied. No Quinn/Rachel in sight. 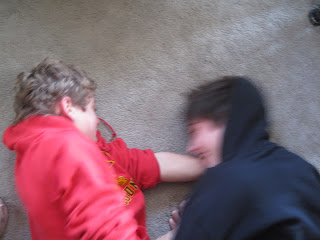 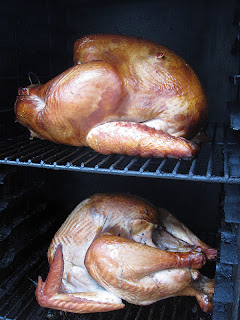 June continues to show Cheerio team spirit in the face of maternal torment. 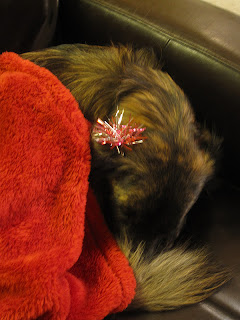 I continue to wash fruit and am, as always, strongly represented by the yearbook staff. 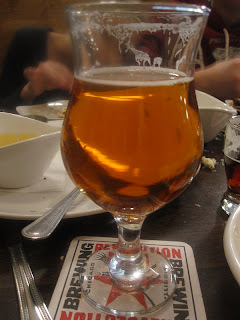 That's how Jennifer sees it.

And that's what you've missed in the Yellow House.
Posted by Jennifer at 12:51 PM 2 comments: Links to this post 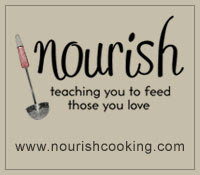 Where Did I See That? Find The Recipe Here!